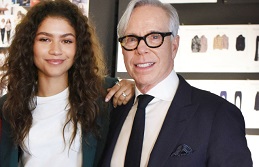 The PVH Corp. owned brand has tapped the 22-year-old, who recently starred in Spiderman: Homecoming and The Greatest Showman to be the new global women’s ambassador. She will be featured in the brand’s global integrated campaign beginning in spring 2019.

Furthering the designer’s commitment to expand its women’s businesses, Zendaya will collaborate with Hilfiger to launch a Tommy x Zendaya capsule collection. The capsule will launch as a see-now-buy-now collection in February, at a location to be determined. The collaboration is for one season, with options to continue.

Hilfiger previously collaborated with Gigi Hadid on four capsule collections that were shown in New York (“Tommy Pier”), Los Angeles (“Tommyland”), London (“RockCircus”) and Milan (“Drive”). Using the see-now-buy-now format, the collaborations were highly successful for the firm and generated huge spikes in traffic and billions of social media impressions.

The partnership with Zendaya reflects Hilfiger’s continued vision to collaborate with those who share the brand’s spirit and values of breaking conventions and celebrating diversity.

“I love to collaborate with people who are passionate about making their dreams a reality and who inspire the next generation to do the same,” said Hilfiger, founder and principal designer of the $7.4 billion company. “Zendaya has become a global icon, using fashion to make bold statements while always staying true to herself. Our capsule collection will fuse her eclectic style with the Americana spirit of our brand.”

“Fashion is more than just wearing cool clothes,” said Zendaya. “It’s a way to celebrate self-expression and individuality, which is extremely empowering. This is why I am proud to partner with Tommy Hilfiger.”

Discussing why he chose Zendaya, Hilfiger told WWD, “Zendaya seems to incorporate all our wishes and desires in a brand ambassador.” He said Hailey Baldwin and Winnie Harlow, who have served as brand ambassadors for Tommy Hilfiger women’s and headlined the brand’s fall 2018 Icons capsule collection, “have been amazing.”

“They’ve been incredible and they’re still the ‘Icons.’ When we launch the Zendaya line, it will be just Zendaya,” he said.

Hilfiger said it hasn’t been discussed whether Zendaya will walk the runway during the upcoming fashion show, but she will walk the runway at the end. Zendaya isn’t a runway model “but she could easily do it, she’s incredibly beautiful and has the right look,” he said.

According to Hilfiger, Zendaya has immersed herself in the project and has a specific sense of what she wants. “Her style is quite eclectic. It goes from casual to elegant and formal. She’s passionate about fashion. She loves getting really involved in the fabrics, the various colors and the drape of the garment,” he said.

Hilfiger said he believes in giving his collaborators enough room to be creative, and it’s a real partnership. “Actually in our collaborations, we’ve found that we take as much information, inspiration and direction from the collaborators as possible. We really want to infuse the collection with their ideas. They are really the target consumer. And one of the reasons we’ve chosen the girls that we’ve chosen is they have very specific ideas about what the looks should be. And it really helps us evolve our brand,” he said.

The brand has been thinking about a successor since they learned that Hadid’s contract was coming to an end. “We were thinking about who’s next and she [Zendaya] just checked all the boxes. She’s a movie star, a musician, a great personality. She really is an advocate of women. She is youthful, she has great, casual style and when you see her on the red carpet, she is magnificent,” said Hilfiger.

Zendaya has spoken out on issues such as calling on Hollywood to better represent black women in entertainment, which Hilfiger welcomes. “She is very outspoken. I think that’s a strong statement, and it’s something we believe in as a company. We had success with Gigi. We would like to see that success come around again. We really believe she [Zendaya] has the power to do it. She has over 50 million followers.”

Following the fashion show, Zendaya agreed to tour with the collection to a number of international cities — similar to what Hadid did. Zendaya will be featured in the spring ad campaign that breaks in mid-February. Hilfiger said the company’s see-now-buy-now strategy “still works for us. It’s still been very successful. No reason to walk away from it,” he said. Hilfiger said it hasn’t been decided in which global city he will show in February, and expects to make that decision by the end of the year.

Zendaya began her career as a child model for Macy’s, Mervyns and Old Navy and backup dancer before appearing as Rocky Blue on the Disney Channel sitcom, Shake It Up. She previously designed a line called “Shake It Up Dance Clothing Line” that included clothes such as legwarmers, shorts, jackets, headbands and athletic apparel and accessories. She was also involved in a line called Daya by Zendaya, and a shoe collection Sole of Daya. In the spring, Boohoo.com teamed with Zendaya on a curated collection, where she chose her favorite items from the high-street label’s spring collection. None of these are ongoing, and Hilfiger has Zendaya exclusively for multiple categories.