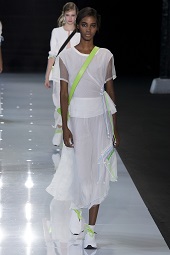 As Camera Nazionale della Moda Italiana president Carlo Capasa revealed during a press conference on Thursday presenting the schedule of the upcoming Milan Men’s Fashion Week, the fashion label will skip its traditional men’s fashion show in June to host a coed runway show in September during the city’s Women’s Fashion Week. The coed show won’t take place at Giorgio Armani’s theater on Via Bergognone, as per tradition, but in a still-undisclosed location. That said, the signature Giorgio Armani men’s show will be held on June 18 at the theater.

Men’s Fashion Week, originally scheduled June 16-19, is now running June 15-18, and will include a range of women’s labels unveiling women’s resort 2019 and spring 2019 lineups. Along with the already announced shows and presentations of Alberta Ferretti and Stella McCartney, hosting events on June 15 and 18 respectively, Finnish label Aalto will make its Milanese debut with a show of the brand’s resort 2019 collection, and Sunnei will present its first women’s range with a coed show on June 17.