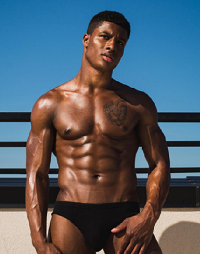 New York-based unsigned model Leaon Gordon released pictures from his latest photoshoot. The images were lensed by New York-based photographer Tanner Albright. He wears MUCH underwear and denim jeans in the shoot.

Gordon needs to be in the pages of Vogue, GQ, Esquire, CR Men’s Book, W, Paper, Harper’s Bazaar and L’uomo Vogue magazines already. I also want to see him walking runways in Paris, London, Milan and New York. He has the abilities to become an international supermodel.