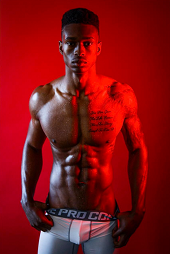 Major congrats goes out to my friend Tynan Leachman! The Chicago native (he was born in San Antonio Texas) just signed a modeling contract with 10 MGMT.

This shoot was lensed by photographer Kevin Hartmann.

I am so proud of Tynan! I discovered him on Twitter last summer and asked him to do an editorial for my website and he agreed (see it here). I also strongly encouraged him to model and he decided to do it. Now the sky’s the limit.

I would love to see the former college football player in the pages of Vogue, GQ, Esquire, CR Men’s Book, W, Paper, Harper’s Bazaar and L’uomo Vogue. I also envision him walking runways in Paris, London, Milan and New York. He has the abilities to become an international supermodel.