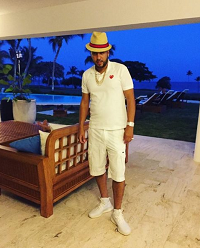 Last night French Montana headed to the Dominican Republic to film the video to his single “No Shopping” featuring Drake. The track will impact radio and the interwebs soon.

Frenchy and Drizzy filmed the video in La Romana in Dominican Republic. Producer Noah “40” Shebib will also appear in the Spiff TV-directed visual.

Montana‘s sophomore offering, MC4 arrives later this summer (August 19). The project will feature the lead singles “Figure It Out” featuring Kanye West and Nas and “Lockjaw” featuring Kodak Black. The Lox, Miguel and Beanie Sigel will also make an appearance on the album.

The shirt is available at Far Fetch and Saks 5th Avenue.