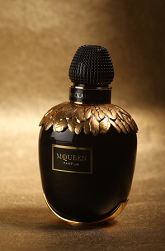 British luxury fashion house Alexander McQueen just unveiled a new fragrance house and a first juice, “a scent for the night owls,” according to WWD.

The fragrance arrives at Harrods on March 1, priced at $385 for a 50-ml. It will also be stocked at the brand’s flagships in London, Paris and Monaco, and the brand’s website.

WWD says, “The new fragrance will feature in some of the Brompton Road windows at Harrods, with the theme of flowers blooming at night. It will roll out to 50 doors globally in the first year, while a lower-priced eau de parfum is set to launch separately this summer. The new scent is expected to generate more than $50 million at retail in the first year, according to industry sources.”

Alexander McQueen had two fragrances, Kingdom, which launched in 2003, and My Queen, which came out two years later. Both were developed with YSL Beauté, before disappearing from shelves by 2008.