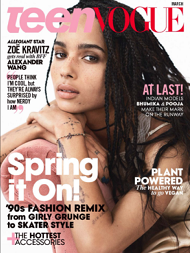 For this issue, Karvitz was lensed by photographer Josh Olins, styled by Elin Svahn and interviewed by fashion designer Alexander Wang.

Karvitz‘s BFF, Wang interviewed her at Locanda Verde, in Manhattan‘s TriBeCa neighborhood. Below are some excerpts:

ALEXANDER WANG: The thing that I always tell people when they ask me about you is that you are very down-to-earth. Despite who your parents are [Lenny Kravitz and Lisa Bonet], you were raised in a way where you had to work for everything yourself. Nothing was just given to you, you’re very driven, and you don’t take things for granted.

ZOË KRAVITZ: My parents didn’t become who they are because anything was handed to them, and they didn’t raise a child who expected something to be handed to her, either. My mom would have killed me if I’d assumed any kind of privilege. At first I was really adamant about making sure people knew that I was working hard. Things were definitely handed to me a little bit easier, but people were also judging me twice as hard.

AW: Is it frustrating to always be compared to your parents?

ZK: I used to get either bitchy or uncomfortable. That came from the insecurity of thinking people were talking to me only because of who my parents are. I’m in a better place now where I’m confident in my work. And I want to be able to talk about them with love. They’re cool people — I get it.

Read the interview in its entire over at Teen Vogue.