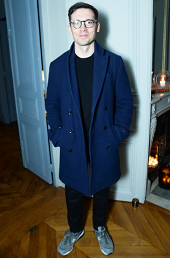 Another day and rumors continues to flood the streets of Paris. The French fashion house is still playing musically chairs. You could see our full update that we reported yesterday Monday (January 13) here.

It is being reported that people in the fashion realm in Paris and London are buzzing about the future of the luxury house. British designer Erdem Moralioglu may be Elbaz‘s replacement.

Fashion Week Daily reports “according to sources, Moralioglu is in talks with the fashion house’s management, which is allegedly courting him to take over.”

“Unfortunately, there is no comment at this time,” said a representative from Karla Otto, one of Erdem’s public relations agencies.

FWD adds, “But according to our source, the deal is far from done—after the hotly-publicized drama following the well-loved Elbaz’s ousting, signing a top talent to team Shaw-Lan Wang is going to be “a tough sell.” Until a new creative director is secured, Chemena Kamali and Lucio Finale are heading up a team of designers to complete the Fall 2016 collection. Expect more news soon from Elbaz, who has been approached by numerous investors and luxury houses in the wake of his successful resuscitation of what was once an ailing fragrance brand.”