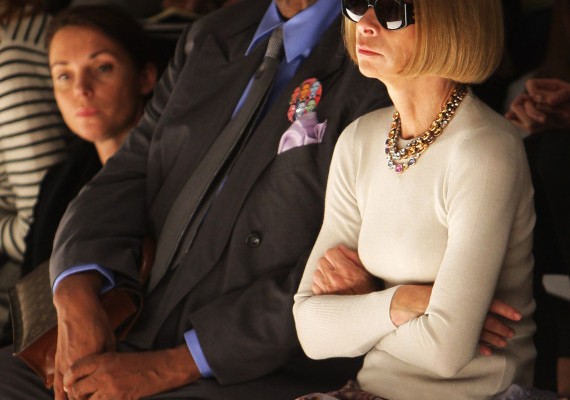 Andre Leon Talley is no stranger to the fashion and publication industries.  The 65-year-old North Carolina born has worked closely with Andy Warhol at Interview magazine, Diana Vreeland at the Museum of Art and Anna Wintour at Vogue.

Not only does Talley have the most impressive list of mentors in the biz, he also has a few A-List friends. He is known as a very close friend of Mariah Carey, Kimora Lee Simmons and Venus Williams.

Talley has written books, served as a judge on America Next Top Model, hosted an Oscars show and received an honorary Doctorate of Humanities from Savannah College of Art and Design. Talley is a front row regular at fashion shows in New York, Paris, London and Milan.

The current artistic director of Zappos Couture recently chatted with Huffington Post about how he transitioned from print to digital, his biggest career regret and how the lack of diversity in the fashion industry has ultimately affected his career. Below are some highlights:

On the one trait that has made him really successful:

My first big job was with Andy Warhol at Interview Magazine. I was deeply insecure. I knew I wanted to be in fashion, but what I think impressed people is that when I opened my mouth and said something, I had done my homework. My advice to young students is: do your homework; research; read everything. You must have something to say that is based on something. So I could go to an event and could connect that fashion moment to something and I think people were impressed by that.

On the most important lesson he learned while at Vogue:

[The] biggest takeaway I got from Vogue, but I also got it from Women’s Wear Daily where I worked, too, is meet your deadline; be way ahead of your deadline; get it in. And if it has to be edited, that’s fine, too. Present what is considered the attitude. That was one of the biggest things I learned. That may sound snobbish, not the attitude, but the attitude of confidence. The attitude that you know what you are talking about. The attitude of confidence in your personal deportment, in your personal statement about clothing, as well as in your presentation for the magazine. Represent the magazine with the attitude that is engaging and rewarding, inviting, not intimidating to the industry.