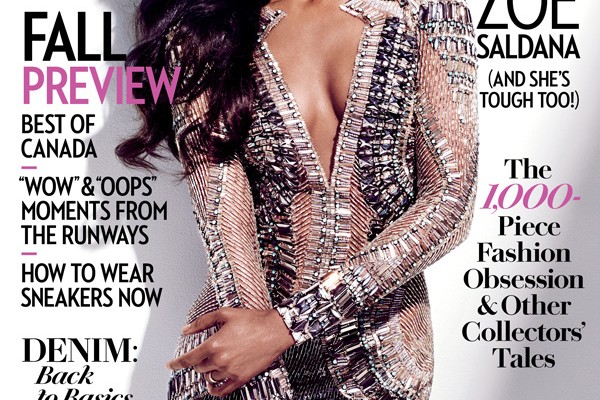 A few months ago, I exclusively reported that Zoe Saldana is the new face of L’Oréal Paris. Things are still looking great for the New Jersey-native.

The American actress Zoe Saldana covers the August 2014 issue of Fashion magazine. For this issue, the Guardians of the Galaxy actress was photographed by Chris Nichollas and styled by Zeina Esmail. In the photo spread, she styled in designers including Julien MacDonald, Dsquared, MCL by Matthew Campbell Laurenza, Emilio Pucci and Jimmy Choo.

On her view of competition in Hollywood:
“I was a ferocious dancer so therefore I was a ferocious up-and-coming actress. When it comes to auditions, I’m not competitive with anybody. I don’t even know who’s sitting next to me.  I wouldn’t even tell you if it was a blonde or brunette. The moment you compare yourself, it weakens you.”

On what her role in the next Avatar will be like:On her marriage to artist Marco Perago after her break up with Bradley Cooper:
“I was finally able to spend time without being in a relationship and even though, it was a short period of time, it was beautiful.  Where I lost that fear of being alone.  It was bliss. Then I met my partner when I was in really a beautiful place in my life.  It was like I found all my answers with him not in him.  I was finding my answers on my own.”

“[Neytiri] is stronger than what I wanted this time, but she’s also very vulnerable. It’s very much her journey and I accepted the job again because I believe the script has her going in the right path. Jake and Neytiri are very much still a force to be reckoned with.”

On the best advice a woman can get: “It’s important to not have women be afraid of you, to accept your mortality and your aging so that you can be a better mentor for up and coming women. Whenever these young women come and they just want to take everything all at once, just because they’re younger and their asses are harder and plumper, you kind of go, ‘Child, sit down.  Yes, you’re beautiful but listen to these 1, 2, 3s.’ 1. Don’t hike up your skirt too much. 2. I’m pretty sure you’re intelligent so act like it. 3. Read a book.”

← Previous Story Help Me Send Off A Student From Harlem, New York To College
Next Story → Tika Sumpter For Essence; Shares Her Showbiz Success Strategy